TL;DR: If you expect a non-tax-deductible donation opportunity to be ≥2x times more impactful than one that you could claim a tax deduction on, you should probably choose the higher-impact option and forego the tax deduction.

Claiming a tax deduction on your donations allows you to effectively increase your overall income, in the form of a tax return. This additional income can then potentially be also donated, increasing your overall impact1.

Unfortunately, not all charities (or giving opportunities in general) are tax deductible.

Sometimes a charity doesn’t have a tax-deductible entity in your jurisdiction. For example, while Effective Altruism Australia (EAA) has done great work making a number of GiveWell top charities tax deductible in Australia, it is (to the best of my understanding) legally constrained from regranting to charities working in other cause areas, such as those promoting longtermist or EA meta work.

Additionally, many promising projects (even those based in the same country) aren’t conducted by registered charities at all, e.g. commissioning independent research, funding a new (i.e. as-yet-unregistered) high-impact charity, providing stipends to talented students, etc.

I’d guess that many donors’ first instinct is to look for tax-deductible giving opportunities. But I’d like to argue that donors may end up having more impact foregoing the tax deduction, and simply donating to the project that they believe to be most impactful, even if this means that their overall donation amount is smaller.

(For the purpose of this piece I’ll assume that the primary purpose of seeking a tax deduction is to increase your net income, or your net donations, and ignore other reasons for doing so.)2

Let’s consider a hypothetical donor with a marginal tax rate (MTR) of 25%. In the donor’s country, Charity A is the most effective donation opportunity. However, there is another charity, Charity B, which operates in a different country, which the donor considers to be twice as effective as Charity A. Let’s baseline to Charity A, and say that they produce one unit of impact for every $100 they receive.

Scenario 1: the donor donates $100 to Charity A, and claims the tax deduction, which is worth $25. The donor has purchased one unit of impact, for a net cost of $75 3.

Scenario 2: the donor donates $75 to Charity B. Ignoring  transaction costs, foreign exchange rates etc., the donor has purchased 1.5 units of impact for the same net cost of $75.

Foregoing the tax deduction allows our hypothetical donor to have 50% more impact overall for the same net cost.

I believe this presents a compelling case that effective altruists should focus considerably more on the impact of their donation rather than the potential for tax deductibility as the key determinant of where they donate.

It’s not always easy to know (or even guess at) the relative impact of two different giving opportunities. However, it’s not necessary that you know the exact multiplier. All that matters is believing that the multiplier is sufficiently large. At normal tax rates4, an estimated impact multiplier of between 1.1x and 2x (which seems very plausible) is sufficient to break even. Even assuming a very high theoretical MTR of 80% only requires a ~5x multiplier to break even. I’ve calculated the break-even points in the chart below, factoring in forex/transaction costs (source)5. 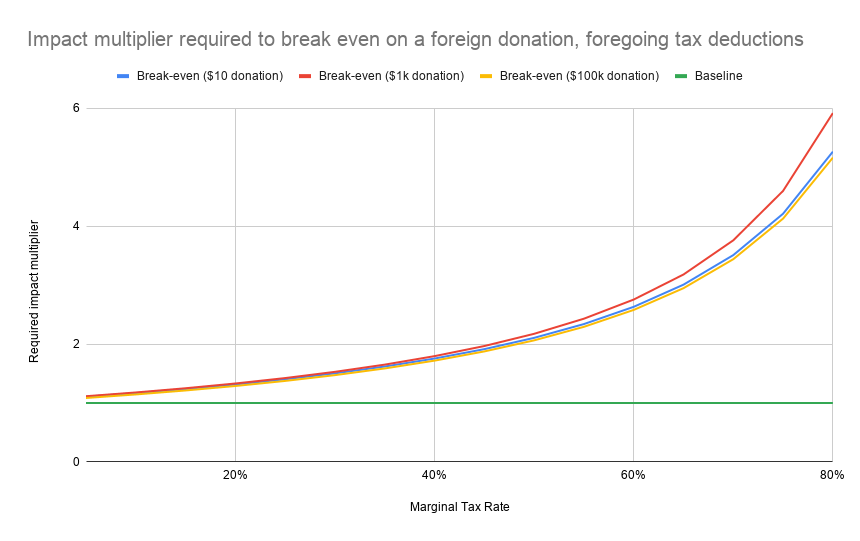 It’s very plausible to me that, for many donors, there exist non-tax-deductible donation opportunities that beat this break-even point considerably. Typical donors think that the impact difference between different charities is around 1.5x, when in reality this is closer to 5x-100x, and it’s a commonly-held view in EA that the best giving opportunities may be tens or even hundreds of times more impactful than the average.

Obviously, the ideal case is that we, as a community, expand tax deductibility for highly impactful projects to as wide a range of countries as possible. Unfortunately this is often fraught with legal complications. Most tax authorities (in my experience) don’t look particularly favourably on pure pass-through regranting, and setting up the required legal entities can be costly and time-consuming. Some countries’ tax codes only allow tax deductions for specific kinds of public benefit (e.g. education, poverty relief), which may preclude donations to e.g. longtermist or meta projects. While many in the community are working to solve this problem6, it’s inevitable that there will still be gaps. And aside from these jurisdictional issues, there will always be the possibility that the highest-impact project on the margin isn’t even being run through a registered charity.

By thinking in this way, you expose yourself to a much broader scope of potential impact. You can find the best charity in the world that champions the cause you care about, instead of settling for a local alternative. You can support talented people in your community who have exciting, potentially world-changing ideas for projects, and help them get off the ground. So, consider just donating less (by the amount of your marginal tax rate) to the projects you believe will have the greatest impact, and don’t sweat the tax deductibility!

Addendum for Giving What We Can members

Giving What We Can members take a pledge to donate a percentage of income. While this is generally taken to be pre-tax income (under the assumption that donations are tax-deductible), members who don’t expect to receive a tax deduction for their donations base their pledge on their post-tax income. If you’re planning to apply the above method to the majority of your donations, you can simply select “My donations are primarily not tax deductible” when reporting your income, which will then prompt you to enter your post-tax income.